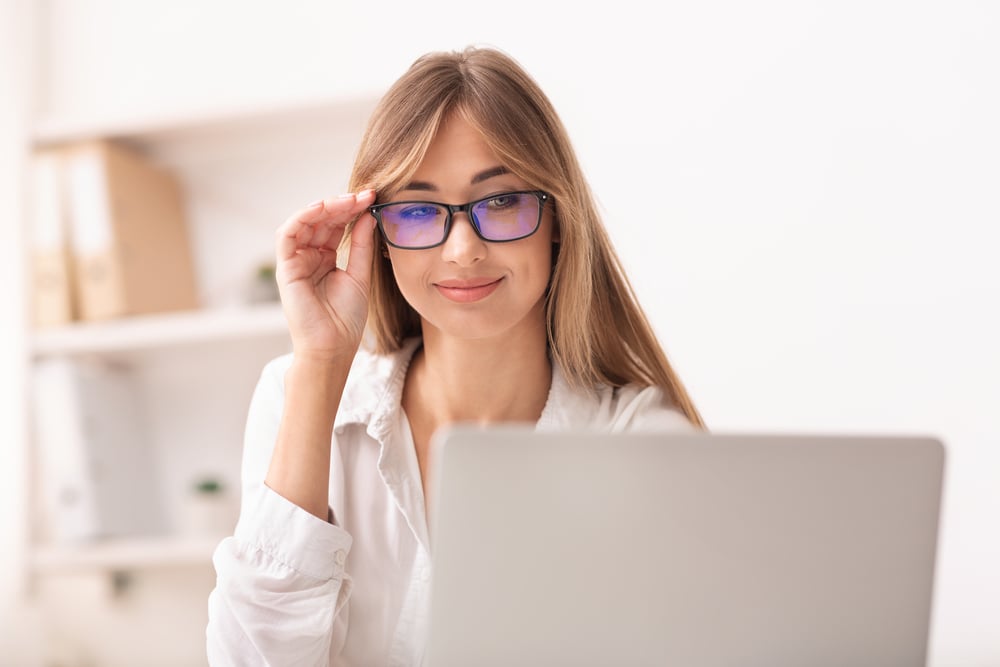 Blue light blocking glasses, or computer glasses as they’re sometimes known, are being marketed as a preventative to eyestrain, headaches, and long-term retinal damage. However, science doesn’t necessarily back up those claims.

Will blue light screen glasses help migraines? Anecdotal evidence suggests they might. Today, we break down the concept behind these types of lenses and attempt to determine whether they are worth investigating as a migraine preventative.

What Is Blue Light and How Does It Cause Problems?

Blue light is simply part of the light spectrum emitted by the sun. You are exposed to it during daylight hours outside or sitting near windows. It is considered a high-energy color and, along with red light, generates the most significant signals in your retina and cerebral cortex.

The human body uses the changing concentration of blue light as it becomes dark out and again when the morning sun comes up to regulate and stimulate the production of melatonin. Melatonin is a natural antioxidant that affects your sleep cycle.

If you were only exposed to blue light from sunlight, you would find yourself feeling sleepy once the sun goes down and more wakeful as the new day dawns. Unfortunately, blue light is emitted from something that has become ubiquitous in modern culture - screens. Computer monitors, television screens, tablets, and the ever-present smartphone all emit blue light.

What happens when you decide to surf the internet or scroll through endless Facebook posts just before bed? The blue light from those screens interferes with your sleep cycle. Your melatonin production is delayed, and you don’t go to sleep on time, nor do you sleep well. Sleeplessness can lead to a compromised immune system.

Blue light can also stimulate the trigeminal nerve, which is active in pain perception during a migraine attack. Blue light may create further discomfort by increasing the symptoms of light sensitivity, nausea, and dizziness.

More than a headache, a migraine can have a constellation of symptoms depending on the sufferer. Migraines include intense, severe head pain, which may be accompanied by:

Many migraineurs have specific triggers that can cause a migraine attack from certain types of foods and beverages to health issues such as stress, head injury, or dehydration. Some have reported migraines occurring after they have stared at a computer monitor or smartphone screen for too long.

Blue light blocking glasses are created rather like polarizing lenses, which block specific wavelengths of light to decrease glare or create contrast. The idea is that wearing blue light blocking glasses while using a computer, watching television, or viewing your smartphone decreases or eliminates the effect of the light on your body functions as well as relieve eye strain.

Plain (non-prescription) computer glasses are available. Also, you can ask for a special coating on your prescription glasses, just as you can obtain anti-glare coatings.

Some of those recommendations certainly sound like blue light blocking lenses are designed and marketed to prevent more than eyestrain. But what does the science say?

So far, studies have only shown that blocking blue light from entering your eyes after sundown can help you get a better night’s sleep. There is not, as yet, definitive evidence that they prevent or decrease eye strain, much less prevent migraines or other health issues as promoted by those selling these lenses.

Blue light does not cause eye health deterioration, so blocking it will not stop eye damage. Also, there is no direct evidence that staring at a screen for long periods creates eye damage or eye strain, either.

Eye strain results from a disparity between the items you want to look at and how your eyes are focusing on those items, as well as how long you spend focusing on them. Therefore, blue light blocking glasses and other preventatives are unnecessary until more research is performed.

The 20-20-20 rule is an effective eyestrain preventative:

In general, you need to take frequent breaks from your screen or monitor and concentrate on blinking more often; people looking at screens tend to blink less, leading to dry eye. If necessary, you can use artificial tears. Another method of mitigating eye strain is to increase the font (type) size of the letters on the screen, making it easier to read.

Other ways you can help your eyes and perhaps avoid a migraine include:

Consider how many hours you spend looking at various screens at work and home. You may be surprised to learn how much time adds up. It might answer your question about why your eyes always feel tired and dry. Be more aware of blinking and focusing at different distances, and try to create habits that provide the breaks you need.

The short answer is actually, “They might not help, but they probably won’t hurt.”

For people who spend six or more hours in front of a computer screen, blue light reduction can help re-establish sleep patterns. As far as migraine or eyestrain prevention, some people report that these lenses help them.

Blue light blocking lenses are not extremely low cost, but for about $100, you can get a pair to try. They won't hurt you, and you may find they help a little, at least with sleeplessness.

And getting a good night’s sleep is an excellent prescription for preventing migraines.