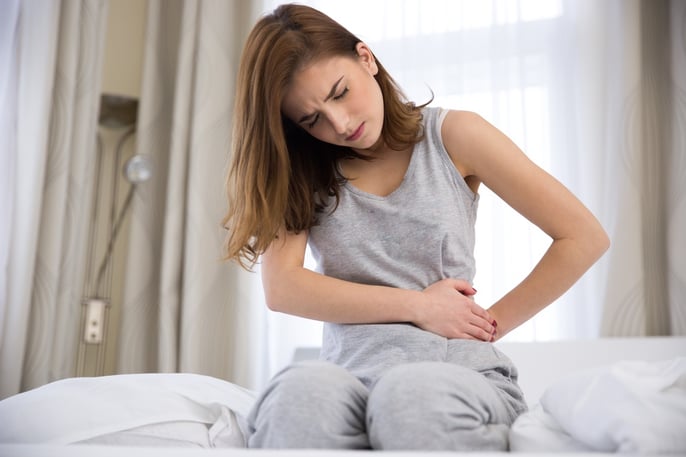 Nausea and vomiting are very common during a migraine attack, with studies showing close to three-quarters of patients experience vomiting and almost 95% feel nauseous. One reason for this is that while a migraine attack begins in the brain, it causes changes in the brain stem and affects the central nervous system, too. Neurologists believe this could be the source of the headache pain, as well as the sensitivity to light and sound often experienced during an attack. Nausea is also a side effect of some common migraine medications.

THE STOMACH’S ROLE IN MIGRAINE

When you experience a migraine attack, it affects multiple parts of your body. The stomach is an area that reacts particularly strongly, with the digestive system slowing down. The medical term for this is gastric stasis or delayed emptying, which tends to take longer than normal during an attack. This results in undigested food remaining in your stomach, and doctors believe this is the most likely cause of nausea and vomiting.

The digestive process can be slower than usual in the patient’s intestines, too, which can result in constipation. Nausea can accompany each of the four stages of a migraine, so even after the headache pain subsides patients might find their stomachs are still upset. The most recent theories point to either the nervous system or changes in the brain stem during an attack as possible causes of Migraine nausea and vomiting.

The onset of nausea, with or without vomiting to accompany it, makes eating during a migraine challenging. For chronic migraine patients who suffer from headaches 15 days or more each month, this means the frequency of nausea can result in unexpected weight loss and problems caused by poor nutrition.

A nausea attack can make it impossible to take migraine medication orally, too, and even when it is possible to swallow it the stomach upset could cause you to lose medication before it’s able to take effect. In addition, the slower functioning of your stomach could result in the medication taking longer to work, which makes it harder to get relief from a migraine.

Research shows that even when gastric stasis improves it doesn’t immediately resolve nausea, either, and that triptan medications can actually make it worse even though they help nausea.

A particular form of migraine attack in which symptoms include episodes of vomiting, CVS is more common in children with migraines and doesn’t necessarily always include headache pain. Symptoms of a CVS attack typically consist of five vomiting attacks, with at least four occurring in an hour, over a period lasting between one hour and five days. The condition isn’t usually a sign of any other disorder and patients are symptom-free between attacks.

OTHER CONDITIONS CAUSING HEADACHES AND NAUSEA

Migraines aren’t the only type of headache to cause nausea and vomiting. Cluster headaches, meningitis, and headaches that accompany any type of viral infection (such as flu) also have the potential to cause these conditions. You can also feel nauseous as a result of conditions like dehydration, low blood sugar, hypertension, stress or anxiety and premenstrual syndrome (PMS). Most of these conditions act as triggers for migraines, too, so it could be difficult to determine whether your nausea is caused by a migraine or by the same trigger as your migraine.

Many anti-nausea medications cause severe drowsiness and are therefore not a great option for migraine patients. Some pharmaceutical companies have developed ways for patients to take medication without it entering the digestive tract, to bypass the risk of losing the medicine through vomiting. Many patients find relief using natural products such as tea made from ginger root, aromatic bitters dissolved in ginger beer or another soft drink, or alternative therapies including acupuncture and biofeedback. Lifestyle changes that can help include quitting smoking and avoiding common trigger foods such as alcohol and chocolate. If none of these measures help to reduce your migraine-induced nausea, ask your doctor for a spring transcranial magnetic stimulator. This is a prescription device that sends pulses of magnetic energy into the brain at the start of a migraine with aura, and it can reduce or possibly stop the headache pain.

Living with frequent migraines is challenging, and patients often have to deal with other unpleasant conditions or side effects. Keeping a migraine diary enables you to track patterns and triggers, and provides valuable information for your doctor on which to base a diagnosis and treatment.